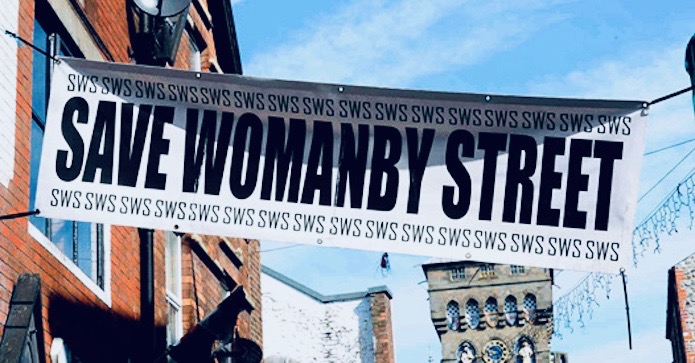 Womanby Street in Cardiff has won an immense victory by music fans campaigning to save it from developers this month. A new ‘Agent of Change‘ principle just passed in Wales means venues which are already established, should be protected from new developments setting up around them and then subsequently making noise complaints. The twats.

Womanby Street has long been the centre for independent music in the capitol but there has been a recent spate of applications for new hotel and student developments which would have inevitably seen noise complaints being made against their neighbouring live music venues, which pump out alternative tunes well into the early hours and would have been the end of the night life culture on the street if they went ahead.

Thanks to intense campaigning and protest marches by the like minded people of Cardiff and beyond, who don’t want to lose what is one of the last places in the city for independent bars and music venues in Cardiff and see them replaced by soulless corporate chains, selling cocktails squirted out of condiment bottles and “craft” beer authentically produced from industrial breweries.

Wetherspoons squatted its corpulent arse at one end of the street some time ago and has been instrumental in the troubles with its plans to expand. We’ve already lost Dempsey’s which hosted probably one of Cardiff’s longest standing grassroots live venues upstairs, now transformed into a shitty sports bar, as if there’s not enough of them. Luckily Clwb Ifor Bach still sits at the centre of Womanby street as its most prolific resident, despite concerns for its future in the past and has been joined in recent years by a cluster of bars which keep the streets spirit of independence alive and provide alternative offerings to the usual malaise of pop music and jager bombs elsewhere .

In Swansea, venues face similar worries, but also a host of other problems, with continued gentrification meaning there’s not even half the number of live music venues which used to be around in the ten last years, The Scene, being the most recent casualty. The ‘Agent of Change‘ policy is a very welcome, if not long overdue and a complete no brainier.

POWER TO THE PEOPLE!!

Here’s a link to a Walesonline article which explains the situation in detail: 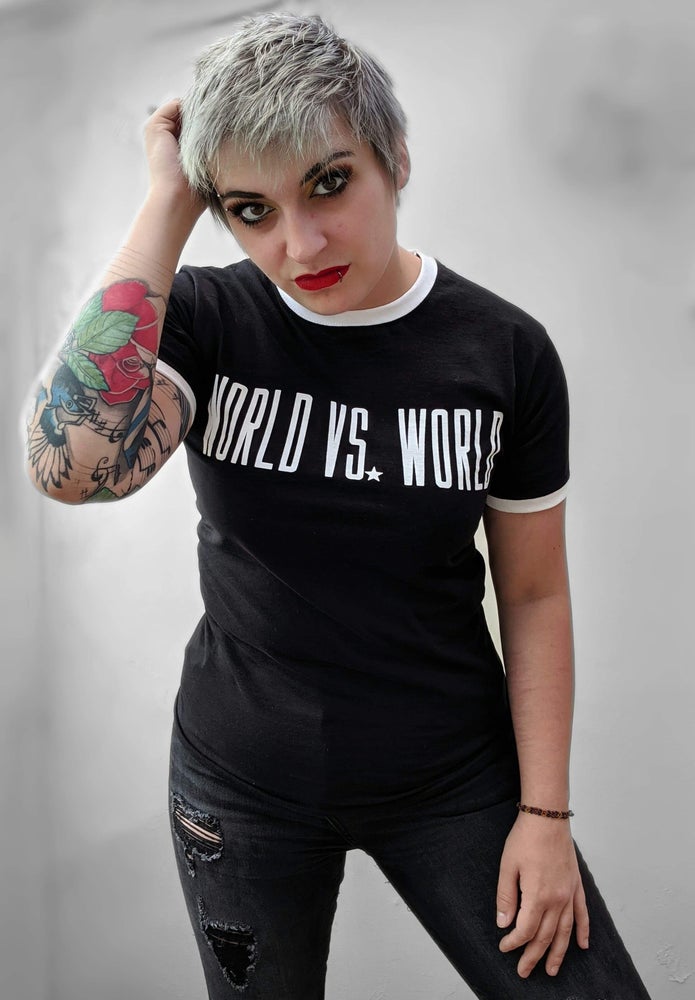 Swansea’s favourite anti hero’s have launched their latest line of Merch for this Summer. You can visit “World Vs. World’s” store at https://worldvsworld.bigcartel.com NOW to get your loot and be the coolest looking fucker in town, ready to espouse free speech and socialist values, crush the totalitariat and overpower your stinking capitalist wage master boss. Better still, come to the next “World Vs. World” gig near you and stop by the merch stall where a member of the band can personally take your cash and thank you with a great big “Tidy”.

A range of NEW designs are available in exchange for £10 which is guaranteed to help keep the music flowing and another few miles of petrol in the tank of the war buss. Do a good thing today, make your wardrobe happy and keep band members breath minty fresh by stopping them from having to syphon gas to get to the next show. 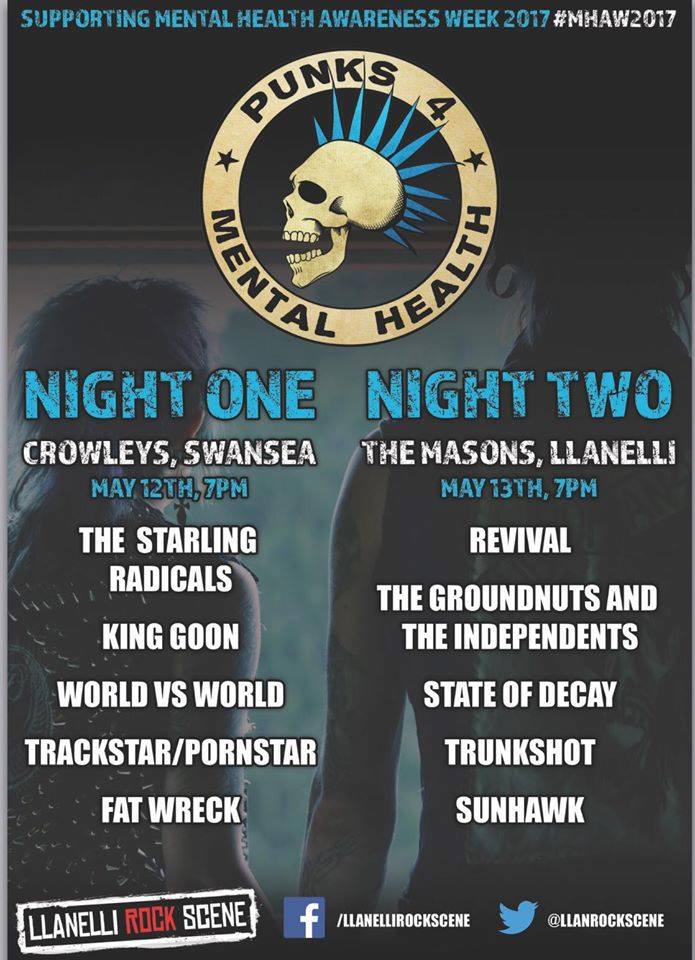 Punks 4 Mental Health is holding a mini festival to coincide with Mental Health Awareness Week on the weekend of May 12th and 13th. The festival will be held across two venues, Crowleys Rock Bar in Swansea and The Mason’s in LLanlli. Doors open 7pm at both events and it’s Free Entry!

Punks 4 Mental Health is a DIY initiative setup to challenge the stigma around mental health, which is an issue which affects many in the alternative community, who often identify and express themselves through underground music, because of its ability to tackle difficult subjects head on and remain uncensored and unmoderated. They describe their aim as

It is a cause which all of us here at DeathMonkey fully supports and endorses. Artists are particularly vulnerable to mental health issues and it is their talent for songwriting and their empathy that helps communicate with fans experiencing similar problems and provide solace that their not alone and that somebody can speak both to and for them, about what they’re going through.

Playing at Crowley’s on the Saturday Night are Death Monkey‘s own “World Vs. World” as well as Trackstar/Pornstar and Fat Wreck which both feature members from some of DMR’s roster of artists all in support of this amazing Punks 4 Mental Health event which promotes something important in as awesome a way as possible! 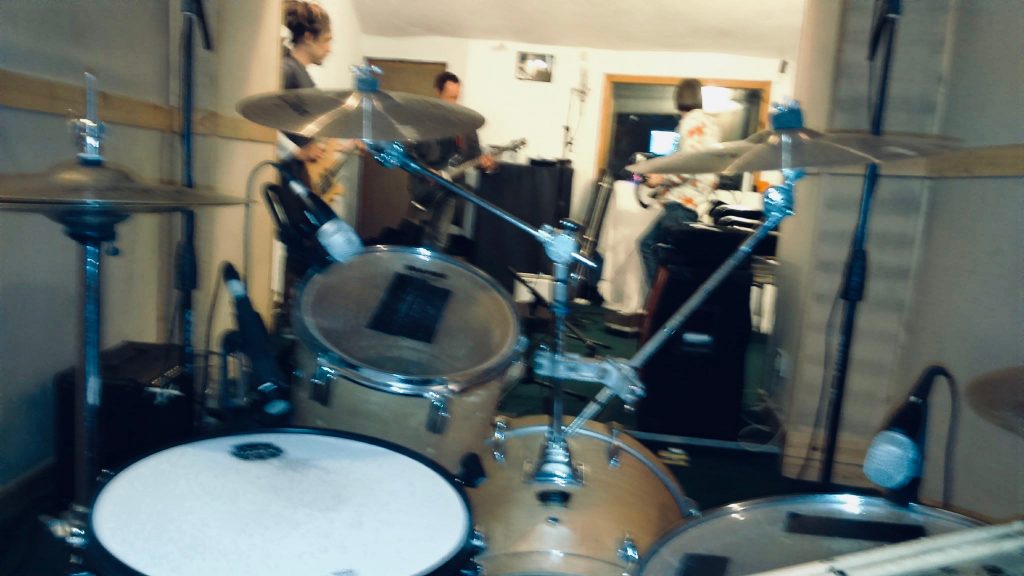 “World Vs. World” Head back to The Studio to Record Next Single

World Vs. World are back in the studio with Death Monkey producer Dave Milsom to record their next single for their upcoming album, once again at the legendary Sycamore Studios, Swansea’s oldest commercial recording studio. The release date is yet to be confirmed but fans can expect to see new material on their playlists in the couple of months!

The New single is as yet untitled, but news of a possible apocalypse on the horizon as a result of feuding between world super powers and irate, secretive and volatile totalitarian states wanting to test out their newly acquired ‘Nuclear Active’ status, are rumoured to be very much in the subject matter and of concerns to the bands latest epic.

Full Details are still forthcoming but “World Vs. World” are rumoured to be taking a new approach with their next album which is going to see them at their most experimental and the release spread out across two highly conceptual mini albums. Their new approach to their writing process and innate need to be as contemporary as possible means that we may see more “World Vs. World” releases on an informal schedule, recording and releasing new songs as singles, to make up the album for a quick as possible delivery and to let people know just what they think about the state of world right now, so that everyone knows exactly where their landing their punches as they happen.