World Vs World are set to release their latest single ‘The Beat of the Alpha’ on February 12th.
The three piece are currently in the studio recording an ambitious two part split concept album titled ‘Human Resources / Collateral Damage’.
The new record will be the follow up to last years well received debut ‘The Sentinel Paradox’ .
‘The Beat of the Alpha’ is taken from the upcoming album and is the first offering of what is in store from the trio on the new LP. With this release front man Kirk Bowen, Bassist, Kristian Davison and Drummer, Damien Harris, continue to evolve their well honed sound, while remaining committed to their brand of politically charged alternative rock.
The bands musical roots are deep-seated in a Punk philosophy and mix social commentary, political intrigue, anger and contempt with the shady realms of conspiracy, always provoking their listeners to look beyond the received message.
‘The Beat of the Alpha’ is a scathing attack on the people who seek to control and manipulate society, a wake up call, reminding us to question the policies and hidden agendas of corporations and governments alike. With it’s symphonic dirty-pop chorus, World Vs World demand to know from their audience “Why do we dance to the beat of the Alpha elite?”
World Vs World set out on a short tour during February and March to promote their new single, with a launch show in Cardiff at FUEL Rock Club on Saturday February 13th and culminating in Glasgow on March 19th. A Full list of Tour Dates can be found on the bands Facebook page. 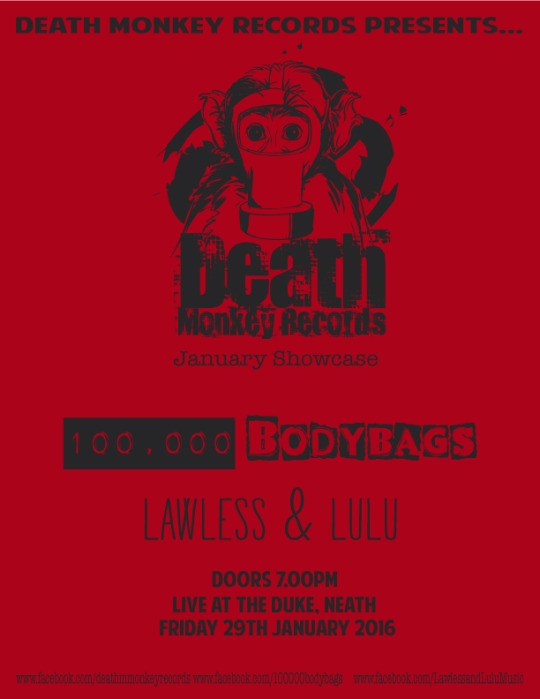 It’s the first Death Monkey Showcase of 2016 at the awesome The Duke Neath.
100,000 Bodybags and Lawless & Lulu will be playing the night alongside Cardiff’s Blue’s based punk outfit Sonny Bonds Duo.
The Duke is a diamond in the rough of South Wales’s underground venues and punches above it’s weight in terms of the auspicious acts who have graced it’s unassuming stage and the reputation it carries as a genuine rock bar, with the kind of Krusty interior and layers of grungy goodness you just can’t fake.
Doors open 7.00 P.M on Friday 29th Jan.