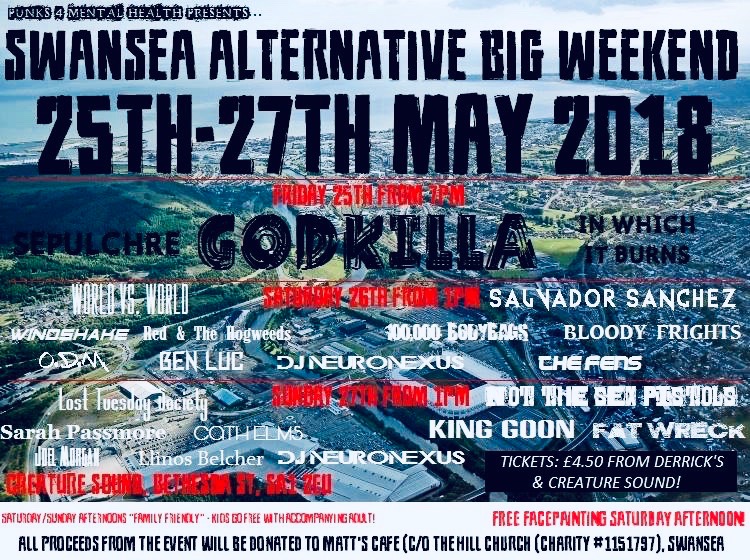 Punks 4 Mental Health are teaming up with Death Monkey this May to offer an alternative to the BBC’s Biggest Weekend which takes place in Swansea over the 25th-27th. The P4MH – Alternative Big Weekend will coincide with the BBC‘s and take place at Creature sound music hall. Tickets for the event will be £4.50 and are available from Derrick’s Records. All proceeds will be donated to the charity Matt’s Cafe.

The BBC have descended upon Swansea this year for their Biggest Weekend, full of all the sort of stuff you’d pretty much expect from a big corporation out to sate the pallet of an indiscriminate mass audience. While that’s definitely not what we’re all about at Death Monkey, each to their own. We already have a pretty awesome live music scene in the city that is both eclectic and original, full of amazing undiscovered artists, unfiltered by the mechanisms and politics of the propaganda machine.

The primary motive for organising The Alternative Big Weekend was the opportunity to disrupt the narrative of the BBC event, in order to draw attention to the important social matter of the impact of mental health on homelessness. But there is another motive behind the subversiveness and where we do have a problem with an event like the Biggest Weekend. While it’s great that a huge entity like the BBC are bringing attention to Swansea as a city for music, something which DMR has been campaigning for since we began, none of the activity around The Biggest Weekend occurs anywhere near the city centre, where all the grassroots venues are located. The Biggest Weekend exists as a micro economy, far away from the venues which could benefit from the increased presence of the thousands of people who will travel to Swansea for the event. We will instead see hoards of people arrive by train, only to take the long walk through the town centre and then wave it goodbye as they breeze passed it completely on their way to Singleton Park.

While mainly focussing on the charitable efforts, it is partly because of this that the P4MH event has been organised. It is out of frustration due to the lack of any meaningful attention given to Swansea music scene through it’s isolation from the event and dearth of any real diversity on the bill for the weekend, for anything other than mainstream pop. P4MH and DMR have decided to team up and offer an ‘Alternative’ for those who would rather chew off their own ears and then cauterise the wounds with the nearest Zippo lighter, than listen to Ed Sheeran, while at the same time raising awareness for a cause close to both our organisations.

“Swansea is not going to know what has hit it”

The Alternative Big Weekend will see some of Swansea‘s most loved and established underground bands hit the stage over the two days. Organised by Death Monkey‘s own Damian Harris in his role as an ambassador for P4MH. When talking about the weekend in May, Radio 1 DJ Scott Mills has said in the press that “Swansea is not going to know what has hit it” and he is most certainly right.

All Proceeds from the weekend will be donated to Matt’s Cafe, a homeless centre based on Swansea High Street. It’s a volunteer-based café for homeless people, where end of life food donations from local businesses and other donors are given to make fresh food on a daily basis for people who attend the centre, the majority of whom are members of Swansea’s ever growing homeless community. All food available there is on a “pay whatever you can afford, if at all” basis. P4MH chose to focus on this charity because of the growing homelessness issue across the country, with 75% of homelessness cases related to poor mental health. P4MH wanted to highlight that contrary to stereotype, most homeless people don’t “choose to live on the streets”, and it is fuelled significantly by being psychologically vulnerable.